Never Have I Ever is LIVE!

This book was previously published. 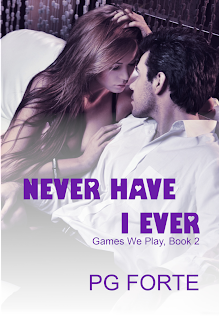 Never Have I Ever
Games We Play, Book Two
by PG Forte
Paranormal/Erotic Romance
30K
Release price: .99!
Kristy loves Luke but if anything was clear to her back when they were kids it was that gawky, awkward, tomboys didn't stand a chance with the king of the schoolyard. She watched her older brothers set their caps for Luke's glamorous cousins and get shot down. So she did what she had to in order to salvage her friendship with Luke. She hid her true feelings and her need for him to take control.
Luke wants Kristy in the worst way -- actually, in all the worst ways: tied up, held down, beaten, bitten, whipped. But he knows he has no chance of ever having her. They'd been childhood friends and sweethearts, until she friend-zoned him in the fifth grade. He knows he can either keep her as a friend or take her to bed and lose her forever. His biggest mistake--so far--was in hiring her to work alongside him in the bar he and his cousins inherited from their grandmother. He knows Kristy needs the money and the job, but Luke's self-control can't take the constant contact with the girl he wants to dominate -- both in and out of the bedroom. Something has to give -- and soon!
Excerpt
Buy Links
Posted by PG Forte at 3/03/2021 02:00:00 AM