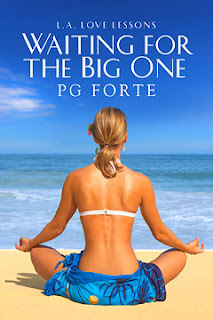 Waiting for the Big One

Long Time Coming. Hmmmm. Okay, I've thought. Go ahead. Think what you will. It works on all sorts of levels...like all the best titles do.

Tonight's post is my first in a while. It's long overdue. That's Level One.

Tonight's post is about my first new release in over nine months. Looong overdue. Level Two.

Tonight's post is about a book that was previously published elsewhere, but not by the publisher it was originally intended for (which is where it is now, thank the Fates). So, this release, a loooong time after the story was written and after many mysterious twists and turns is, you guessed it. Level Three.

Then there's the story itself. The story of love delayed, denied, and made to wait. Level Four.

Then there's you. The impatient blog post reader who, at this point, has to be wondering, "will she ever get to the damn point???" I will, I will. But that's still Level Five.

Waiting for the Big One is my first novella and a radical departure for me in terms of style, length, subject matter...almost everything, a fact anyone familiar with my Oberon series can attest to.

It's light. It's humorous. It's amazingly short, especially for having been written right on the heels of the amazingly long, Dream Under the Hill. It's quirky--something that some of us consider to be a good thing. Not Mrs. Giggles, perhaps, but...well, you know, Other People. People who are less put-off by idiosyncratic, astrologically obsessed, Piscean characters...or was that idiosyncratic, astrologically obsessed, Piscean authors? Same difference, I suppose.

Actually buying it wouldn't hurt my feelings any, either. lol!

And, just to (hopefully) intrigue you, here's the blurb:

Like everyone else in LA, actress Gabby Brown is waiting for The Big One. The big break that will make her a star. The big quake that will rock the city to its knees. Or, in her case, the Big O—the elusive, G-spot, ultra orgasm. She thinks she's found the guy who’ll give it to her when she meets Zach, the super hot musician who's just moved into her building. But Gabby's quest to find true love and ultimate pleasure with the rock guitarist of her dreams is complicated by her friendship with Derek, the martial arts instructor with whom she's co-writing a screenplay.

Gabby has refused to even consider Derek for the role of soul mate because she fears sex will ruin their friendship. But, Derek has ideas of his own, and they don’t include sharing Gabby with anybody.

When an early morning earthquake precipitates a crisis at her day job—dog-walking the pampered pets of Hollywood's elite, off leash in Runyon Canyon Park—Gabby turns to Derek for help. His actions force her to re-evaluate her feelings about mixing sex and friendship.