Baby, It's Cold Outside!

Welcome to out blog hop! As always, if you fall off somewhere along the line, just go to   http://justromance.me to jump back on.

Today, I've decided to post an excerpt from my Futuristic/Sci-Fi/Menage, Finders Keepers. It's set in the winter (in Lake Tahoe, for the most part) and it totally fits the theme of the hop. It's also my first published menage, it's out in print AND ebook, and I love it. Here's the blurb and excerpt. Enjoy! 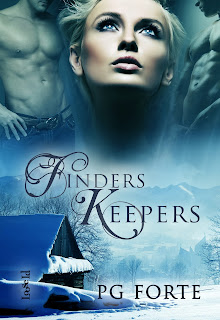 Blurb: Sometimes finding what you want is the easy part.
Caleb is a bionic soldier with little-to-no memory of his past. He's seeking the truth about himself and those missing memories.
Aldo's an undercover cop who just might have the answers to Caleb's questions. But if Caleb's the man Aldo thinks he is, how can he let him get away a second time?
Then there's Sally; she's an ER physician who used to be married to Aldo's late partner, Davis. Sally's not dealing with widowhood very well. In fact, it's getting harder, every day, just to find a reason to keep getting out of bed. If the truth about the men's shared past comes to light, she could lose them both. Along with her last, best reason to go on living.
This holiday season, chance will bring them together and give them an opportunity to help one another find what they each want most. But every gift comes with a price. And keeping what they've found once they've found it? Yeah, that's gonna be the hard part.

Caleb turned as Sally came to join him at the railing. She was wearing a fuzzy sweater—mostly purple, but with bright bits of pink and gold and olive green mixed in that made her eyes look even bluer—over snug jeans and carrying a steaming mug of coffee. In the sunlight her hair looked almost iridescent. “Yeah, it is,” he said, smiling at her. “And it’s just gotten prettier.”

That got him a smile in return—one of those knowing, secretive smiles all women seemed to do so well, full of mystery and promise—and a softly spoken, “Thank you.”

“Thank you for letting me barge in on your vacation like this. I hope I’m not intruding?”

Amusement sparkled in Sally’s eyes, and another pretty blush climbed her cheeks. She took a sip of her coffee and then said, “Aldo didn’t tell you, did he?”

“I only agreed to come because he said you’d be here.”

Sally shrugged. “He’d been pestering me about it for weeks, but I guess I thought it would be too depressing. You know, just the two of us, sitting around feeling sorry for ourselves? I know he thinks he needs to take care of me, but he didn’t have to spend his holiday doing that.” She glanced at him and smiled. “But then he told me you were coming up here with him and…”

She trailed off, eyes gleaming, cheeks even pinker than before. Caleb felt his chest tighten in alarm. “I’m not with him,” he hurried to explain.

Sally ducked her head. “I know that. Or…at least I hoped that was the case. After you left the other night, I have to admit I wasn’t completely sure.”

Caleb sighed. “I know. I’m sorry. I shouldn’t have run out on you the way I did.”

“Yeah.” She put her coffee down, leaned her forearms on the railing, and turned her head to look at him curiously. “About that. What happened there? I thought things were going pretty well and then…?”

“They were.” He placed his hand on hers. “You know they were. It’s just that I didn’t know about your husband at the time. And then when I saw your home…I guess I got it in my head that you had a boyfriend who was maybe out of town or, I dunno, maybe you two had had a fight or something, and I didn’t want to get in the middle of that. I mean, I couldn’t get in the middle of that. You know who I am, but it’s not supposed to be common knowledge. But then you kissed me, and I stopped caring about that. Until the phone rang and…” He broke off with a shrug. “I should have given you a chance to explain.”

Sally nodded sadly. “I know. You should have. And I should have told you about Davis. Aldo said the same thing.”

Aldo again. Caleb straightened away from her. “Sounds like you two are really close.” He couldn’t believe how much that fact bothered him.

Sally nodded. “We are. He’s my best friend.”

“And you met him through your husband?”

“Other way around. I’ve known Aldo since college. He’s the one who introduced me to Davis.”

“I see.” Aldo. Davis. Caleb suppressed a sigh. He loved the way her tongue caressed their names. He’d give anything to hear her say his name like that. “I guess I’m confused. I thought he was older than you.”

“He is. But only by a few years. He was in the military for a while. He went back to school after opting out.”

“Oh yeah? Where? What branch?”

“I don’t know.” Sally picked up her mug again and took another sip. “He might have mentioned it once. Probably he did, but I don’t remember and he never talks about it. Something happened to him there. I don’t know what other than that it left him disillusioned about pretty much everything—but don’t tell him I said that. Like I said, he hates talking about it.”

Her words barely registered. Caleb’s attention had gotten caught up in the way her tongue traced over her lips. The need to kiss her again had been building inside him ever since he’d left her apartment the other night. Now it all but overwhelmed him. He shifted closer. Her eyes widened in surprise when he took the mug from her hand and set it on the railing, then grew dark as heat and understanding took the place of surprise. Her lips curved upward, and that was all the invitation he needed.

He gently caged her face in his hands. As he bent his head, her mouth opened on a soft sigh. She tasted of coffee and cinnamon and woman, a lush, spicy flavor that went straight to both his heads. He groaned as he wrapped an arm around her back and pressed her close. He couldn’t get enough of her. From the way her hands clutched at him, crushing fistfuls of his jacket, he had the feeling maybe she felt the same. As she went up on her toes, her hips brushed along the length of his erection, stroking him through his jeans. Even that slight contact was enough. He sucked in a quick breath as desire knifed through him.

He cupped her butt in his hands, and then he lifted her against him, intent on grinding his hips into hers. A soft whimper left her lips as she slipped her arms around his neck and teased his tongue with hers. He had never been sorrier for all the layers of clothes that separated them. Despite the fact that they were outside in broad daylight and it was cold as hell, he’d have had them both undressed in an instant—if he could only figure out how to do it without breaking her hold on him or breaking their kiss, or without taking his hands off her for even a second.

It took the sound of a door slamming open and a loud voice announcing, “Hey, c’mon. Breakfast!” to shake Caleb back to his senses.

He lifted his head. His gaze immediately locked with Nash’s across the width of the deck. Nash stood just outside the cabin door. His hands were fisted at his sides, and an odd, angry-looking flush was on his face.
There was a look in his eyes Caleb couldn’t decipher, even with his enhanced vision. What was that?

Anguish? Longing? Jealousy? Need? It was gone before he could figure it out, if it had even been there at all.
Certainly Nash’s voice sounded nothing but jovial as he demanded, “Are you two at it already?” He spread his hands wide and arched one brow and looked pointedly at Sally until she giggled and hid her face in the front of Caleb’s jacket—for which reaction Caleb totally owed him. “I can’t leave you alone for a minute, can I?”

“Oh, sure you can,” Caleb replied, loosely folding his arms around Sally. “In fact, why don’t you just go back inside? Go back to doing whatever you were doing and let us get back to doing…whatever we were doing,” he added, consciously echoing Nash’s own words to him at the station the other day. He wasn’t ready to give this up yet. He was enjoying it all too much—the way Sally felt nestled against him, the way she fit so perfectly in his arms. This was why he could never give up women entirely—or part of the reason, anyway. It didn’t matter if a handsome man could turn his head from across a room or across a redwood deck. It didn’t matter that, right now, for example, the sight of Nash, with his thin navy pullover and well-worn jeans stretched taut over his muscular frame, made Caleb’s mouth dry, made his knees feel unacceptably shaky. Made him feel altogether too conflicted. Nash needed to leave. Now.

“Hey, if you want to stay out here all day, it’s your call,” Nash answered, those broad shoulders rising and falling in a small shrug that only served to focus Caleb’s attention even more firmly on them. “No business of mine. Just so you know, though, breakfast is ready, and I have a lot of other cooking to do between today and tomorrow, so if you don’t come in now, you’ll be eating it cold.”

“All right, you win.” Sally turned her head to smile at Nash over her shoulder. “We’ll be there in a minute.”

Sally looked up at him and grinned. “Or better yet, three.”

Aldo rolled his eyes, shook his head, and went back inside, leaving Caleb to wonder when, in the last two minutes, “Nash” had become “Aldo” and why it was that the sight of him walking away should leave Caleb suddenly feeling…bereft? Why was he suddenly wanting to call him back, wanting to draw him into a three-way kiss?

“So,” Sally purred as soon as the cabin door closed and they were alone once more. “Where were we?”

Caleb glanced down at her and smiled, refocusing his attention. “Somewhere right around here, I think,” he said as he cupped his hand around the back of her neck. He loved the way she slipped her arms around his neck once again, loved the feel of her body against his as she rose up on her toes.

He sighed in contentment as he settled back into her kiss. He could be wrong, but he was pretty sure they were going to miss breakfast.

Finders Keepers is currently on sale at Loose Id

Other buy links: Amazon, B&N, ARe