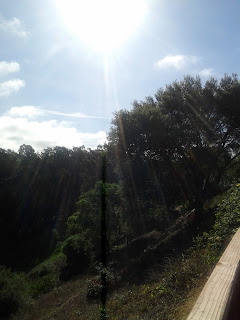 Happy Earth Day everyone! And welcome to our Blog Hop. That scene over there on the right  is the view from my deck this morning, but the photo might as well have been taken in Oberon, the fictional California coast town that was the setting for my first series.

Fellow  Naughty Novelist Kelly Jamieson wrote a blog post recently about her trip to Chicago and how much fun she had re-visiting places where several of her stories are set. I get that pleasure every day. 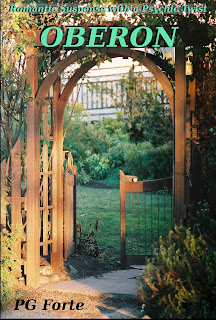 For today's post I'm sharing an excerpt from the most environmentally-focused of the Oberon books, A Taste of Honey. This is Lucy and Dan's story and, in a lot of ways, it's still my favorite. I'll be giving away a free download of the book as a prize today AND, I'm also giving away a free novella to anyone who'd like to see what Oberon is all about. Just email me at pgforte@pgforte.com with Oberon Novella in the subject line.

Before we get started, I just want to remind everyone if you get lost somewhere along the blog-hop trail, just go to www.justromance.me and pick up where you left off.  Now, on to the post...

There's something magical about the tiny California coast town of Oberon.  Something that transcends explanation and defies description.  Things happen here that could happen nowhere else.
But living in 'Psychic Central' is not all white light and fairy dust.  Danger lurks beneath the bright surface, and the all too human emotions of jealousy, hatred and greed occasionally rage out of control...

A Taste of Honey:


Lucy Cavanaugh has it all - the perfect family, the perfect husband, the perfect marriage. What more could she wish for? Other than the chance to do it all again. To experience once more the agony and ecstasy of falling in love with the man of her dreams.


When the Cavanaugh's near perfect marriage goes off the rails, it takes a band of angels to get them back on track.

Excerpt (This scene takes place shortly after Lucy and Dan met, when they were still just "getting acquainted with one another):


Dan was a big guy, and Lucy expected him to have a big appetite.  The Lord knew she was feeling absolutely famished after the afternoon’s exertion.  So when she followed him into his kitchen, the very last things she expected to see him pulling out of his refrigerator were what appeared to be the makings of a salad.

He was wearing nothing but a pair of blue plaid boxers, and although it wasn’t the first time she was seeing his broad, bronzed chest, or the powerful muscles in his shoulders and arms, the sight gave her an odd, hollow feeling in the pit of her stomach.  Probably just hunger, she told herself, determinedly pushing the dangerous idea that it could be due to anything else to the backof her mind.


He looked up as she entered the room, and when his glance took in the fact that she was wearing his shirt, he smiled--with entirely too much smug satisfaction, she thought as she frowned in response. Even despite what they’d just gotten finished doing, she didn’t exactly feel comfortable with the intimacy that borrowing his clothing implied.  But she hadn’t been able see the point of getting dressed again, either--not when she was only going to take her clothes back off a short while later.  Nor had she liked the idea of parading around his apartment in her underwear, as he was doing.  So it had seemed, at the time she made her choice, like the least evil of her options.


Until she’d put the damn thing on and the scent of him clinging to the fabric made her go weak in the knees. She’d had to sit right back down on the edge of his bed while she buttoned it. Her heart thundering in her ears, her mind dizzy with thoughts of all the things his hands and mouth had done to her.
Still scowling, she gestured at the cluttered countertop.  “What’s all this?”


“Dinner.”  He motioned her towards one of the stools pushed beneath the breakfast bar.  “Here.  Sit down.”


She surveyed the platter he’d arranged on the counter. “Are you a vegetarian or something?”  It wasn’t like she had anything against it, but he sure didn’t seem like the type.
Dan grimaced.  “No, I’m not.  But I wasn’t exactly planning on entertaining anyone here tonight, either.  So we’re just gonna have to make do with what I’ve got on hand.  Okay?”  He’d picked up a slice of avocado as he spoke, and now he held it out to her.


“Yeah, sure.  Whatever,” she said as she reached for it, but he pulled it away from her hand.


Lucy felt her stomach tense.  He had to be kidding?  He wanted to feed it to her?  She frowned at him again, but his smile didn’t waver and his eyes held a challenge she couldn’t back away from.  Reluctantly, she opened her mouth and he gently slid the slippery green-gold chunk inside.  It was perfectly ripened, soft and buttery, with just a hint of balsamic vinegar.  Her taste buds—traitorous little beasts who couldn’t care less how the food got to them, it seemed—immediately went into ecstasy.
“Good?” he asked popping a piece into his own mouth.


“Mm,” she murmured, non-comittally.  She helped herself to another piece.


“Here, try the tomatoes next.”  He picked up a tiny orange cherry tomato, and once again held it inches from her mouth.  Lucy sighed, and rolled her eyes, but this time she opened her mouth for him just a little more willingly.  The tomato was also delicious, and just slightly warm, as if it still retained some trace of sunshine.  She bit down on it and it burst inside her mouth with a rush of flavor.


The second tomato was as good as the first, but this time, instead of popping it into her mouth he brushed it back and forth across her lower lip teasingly, until she grew impatient and took it between her teeth and tugged it free of his fingers.  She smiled at him, triumphant at having beaten him at his own game.  But  Dan was smiling too, as if she’d done exactly as he’d wanted her to.  His blue eyes gleamed wickedly, and she felt her breath go as she caught sight of the heat that smoldered there.  She was no longer certain she understood the rules they were playing by.


“My turn,” she announced recklessly, picking up a tomato and dangling it in front of his face.  He leaned forward and took it into his mouth.  His lips and tongue briefly caressed her fingertips.  A tiny tremor ran through her at the touch and she felt a flush of heat spread across her face.


When he turned to remove something from the oven, Lucy took the opportunity to gather her wits; slipping another piece of avocado into her mouth with trembling fingers.


The rest of the meal went much the same way.  They fed each other from the wheel of melted Brie that Dan had heated in the oven.  The soft cheese stuck to their fingers and had to be scraped away with their teeth,  as well as their tongues.  A surprisingly time consuming process, Lucy discovered, and one which left her fingers tingling from his touch.  Next, he’d produced artichokes dripping with melted butter and firm, briny, black olives; sweet peppered pecans, and last of all, a whole can of smoked oysters.  All of it washed down with several glasses of a locally produced Cabernet that was deeply dark, almost earthy in flavor, with an elusive cedar scent.  It tasted like a summer night in a pine forest, Lucy thought, feeling dizzy after a couple of glasses.
For dessert, Dan brought out fresh strawberries.  When those were almost finished, he suddenly remembered the can of whipped cream that was supposed to have accompanied them.


“Well, no sense in letting it go to waste, huh?” he said, after the berries had all been eaten, “Let’s just take it back to bed with us.”


Lucy frowned.  “You don’t really want to eat that in bed, do you?” she protested, trying to free her mind from the warm drowsiness the food and wine had produced.  “It sounds awfully messy,”


“Well, we’ll just have to be sure we clean up after ourselves then, won’t we?”  Dan answered with a sly smile, tugging at her hand and leading the way back to his bedroom.


“All right, Cavanaugh,” Lucy sighed, after this had gone on for awhile, “Don’t you think we’ve had about enough to eat now?”


“Nope.”  He grinned at her, and then threaded his fingers through her hair, using it to turn her head just slightly to the side, holding her there while he leaned in to kiss her again, lightly.  “As a matter of fact, we’re just getting started.”


And then, before she had any clue what he was planning, he’d sprayed whipped cream all the way down the side of her neck.  She gasped as the cool cream hit her skin.  Her heart began beating so quick and hard it was almost painful, and her eyes drifted shut as he lowered his mouth to her throat and slowly licked and kissed his way down her neck, leaving a trail of cool, damp, shivering skin in his wake.

For my charity, I've chosen Garden Harvest to honor Lucy's love of chickens. Click on the link to read more about it.

For more information on the Oberon series, please check out the Oberon website: www.OberonCalifornia.US  or email me at pgforte@pgforte.com to receive a free novella (offer good for this weekend only).