Cover Reveal and Excerpt from Two Truths and a Lie 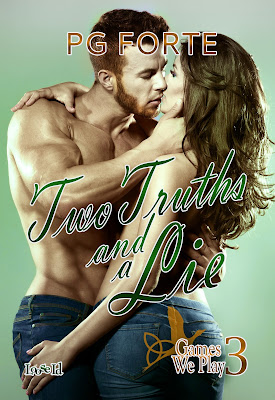 The third book in the Games We Play trilogy, Two Truths and a Lie releases next Tuesday. This was such a fun series to write.

This is Brenda's story. Unlike her cousins, Brenda is far from confident of their ability to make a success of their family's hotel, The Wild Geese Inn.

A month earlier…
“Is there some reason you keep staring at me, Mr. Murphy?”

It had been approximately fifteen minutes since Brenda had made Max’s acquaintance—since she’d overheard him checking in, recognized his name as one she’d been waiting for, and hurried over to introduce herself. It had been maybe ten minutes since she’d invited him into her office so that they could discuss their mutual business in private, and so that she could warn him against accidentally mentioning said business to her cousins.

And for most of that time Max had been staring at her. Even now his gaze was tracking her every move, coming to rest, every now and again, in all the most unexpected places: her neck, her lips, her fingers, her hair, her breasts.

Well, okay, maybe not all those places were unexpected, but enough of them were to make her feel exposed.

She wouldn’t have characterized herself as being unusually vain, and she was certainly no stranger to male appreciation—or scrutiny—but Max’s unwavering attention, coupled with her own intense awareness of it, of him, was quickly becoming a problem. If for no other reason than it prevented her from scrutinizing him.

Her cousin Gwyn would probably have bolted by now. Her cousin Luke might have already thrown a punch. Brenda preferred to clear the air and set things straight. “Is there something wrong with my appearance?”

“No, not at all.” A flush colored Max’s cheeks. “I apologize. It’s just that you remind me of someone I used to know.” He looked her right in the eyes as he said it. And there was a hint of challenge in his gaze, as though he were daring her to make something of it. Suddenly, Brenda felt it too, a vague but unmistakable feeling of familiarity. An overwhelming sense of yes, there you are. At last. If she were superstitious she might term the sensation déjà vu or concoct some ridiculous fantasy—that they’d been lovers in a past life, for example, or soul mates destined, since before either of them were born, to meet and fall in love. But she wasn’t superstitious, so she called it what it was: meaningless coincidence.

She cleared her throat. “Anyway, getting back to what I was saying, my cousins don’t know that I’ve been in contact with Fairfax, and I’d prefer to keep it that way for now.”

“I understand.” He glanced away, at last, an odd expression on his face. Brenda couldn’t decide if he looked relieved or disappointed. “And, to be honest, until there’s an actual offer on the table, I’d rather they not be involved either. However, I do anticipate being around quite a lot in the next few weeks, asking questions and whatnot. They might find that curious. What do you suggest I say if they wonder why I’m here?”

“I’m glad you asked, because, as it happens, I’ve given the matter a good deal of thought.”
He smiled faintly. “Somehow that doesn’t surprise me in the least.”

Brenda wasn’t exaggerating. Over the past few weeks, she’d thought of little else. Luke might be enamored with the idea of having his own bar, and Gwyn was clearly emotionally attached not just to the business but to the building itself. But Brenda was the realist. The one who’d gone to school for hotel management. The only one, or so it seemed at times, who realized how much trouble they were all in.

She’d taken on a variety of tasks since November in an effort to refamiliarize herself with the hotel. She’d helped out in the kitchen, taken a shift or two in the bar; she’d made beds, and ordered supplies, and checked guests in and out, but anyone could have done as much with equal or—in many cases—superior results. Growing the business, protecting her and her cousins’ inheritance, making sure the three of them didn’t end up losing everything—that was her job, her passion, her only real contribution. That was the one thing she could do better than anyone else.

And she was failing at it.

So, yes, she’d gone looking for solutions—because someone had to suck it up and be the adult. When she learned that the Fairfax hotel chain was potentially interested in acquiring the property, she’d done the sensible thing and followed up with them. And when they’d told her they were sending an inspector—one Max Murphy—down here to check out the property, she for damn sure had given thought to the question of what kind of cover story she could use to explain his being here.

“I thought we’d tell them that you’re an author,” Brenda explained. “We could say you’re here doing research for a book you’re writing.”

“I’m not sure I follow. What kind of book are we talking about? Like a travel guide?”

“No. I was thinking more of a novel that you’re planning to set in a hotel like this one. That way you can ask whatever questions you like and no one will think twice.”

“I don’t know how I feel about that.” Max hesitated. “It seems a bit far-fetched. And I’m not sure how convincing I’d be as an author.”

Brenda shrugged. “Obviously, it would be best not to say anything at all. But I think, if they ask, we should have a story ready.”

“I’ve always felt that, in situations like this, it’s best to stick as close to the truth as possible.”

“I agree. So what would you suggest?”

Max smiled. “We could tell them we’re dating.”

Oh, like that’s not far-fetched? Brenda started to laugh, then quickly turned it into a cough when she realized Max was serious. “Sorry. I don’t think that would be a good idea.”

“You’re not married, are you? Or otherwise involved?”

“Do you really think I would have suggested we date if I were in a relationship with someone else?”
“Sure. Why not? You might be polyamorous, or in an open relationship, and not see anything wrong with it. Or you could be a liar, or a cheater—”

“In which case I probably wouldn’t admit it, anyway.”

“Were you always this cynical?”

“No. I used to be shockingly naive. But then I grew up.”

“I don’t know why. It’s hardly your fault. Frankly, I’m not even sure why I asked. It doesn’t matter, does it? Since we’d only be pretending to date.”

“What if we weren’t pretending? What would you say if I were to ask you to have dinner with me—for real?”

“Because I’m not your type?” He said it lightly, with his smile still in place, but there it was again, that hint of something in his eyes that looked absurdly like pain.

Brenda shook the odd notion away. “No. That has nothing to do with it.” Sweet Lord, Max was practically the poster boy for her type. She’d been attracted to large, red-haired, bearded men from a very young age. Since that one time that her Aunt Glynis decided it would be fun to take Brenda, Luke, and Gwyneth into New York City to give them a street-side view of the Saint Patrick’s Day parade. One glimpse of the NYPD Emerald Society Pipe & Drum Corps marching up Fifth Avenue, row upon row of kilt-wearing men, tall, broad, and imposing, was all it had taken. Brenda had been hooked. But physical attraction wasn’t everything. “If you must know, I don’t date, not in Atlas Beach.”

Max quirked an eyebrow. “May I ask why not?”

“There are several reasons actually.” None of which were any of his business. “I don’t have a lot of time right now, for one thing, what with running the hotel, negotiating with Fairfax—”

“Yes, thank you. That too. For another, the dating pool here is very small, and I’ve known most of the men in it since preschool. You’d be surprised how off-putting that can be.”

Although, unfortunately, not off-putting enough where some of the men were concerned.

To read more about the series, check out my website: http://www.pgforte.com/GamesWePlay.htm

Brenda's relationship with Max is a sexy sham designed to keep her cousins from learning of her plans to sell their family's inn. Falling in love for real? That was not supposed to happen.

All work and no play has been the story of Brenda Donovan's life for the past few months. Concerned about the future of her family's inn, she's been searching for a buyer for the business -- without her cousins finding out what she's up to. She has no time for relationships. But pretending to date sexy Max Murphy, the hotel scout who's there to assess the property? That's totally doable. Especially when games, role-playing, and light bondage are included in the package. Falling in love was never supposed to be part of their deal, however, and now her heart's in play. Max has no problem with hiding his true identity from Brenda's cousins. But are they the only ones he's deceiving? When all is finally revealed, will the cousins lose the Wild Geese Inn? Or will they add another member to their growing family?