Hi there, blog-hoppers! Welcome to another fabulous blog hop brought to you by Just Romance Me! As always, if you fall off somewhere along the line, just go to http://justromance.me to jump back on.

I love the theme of this blog hop! As soon as I heard it, I knew just which of my characters I'd be talking about today: Conrad and Damian from my vampire family saga, the Children of Night series. Conrad Quintano is a vampire, but not just any vampire. He's one of a special breed of vampires, the super-powerful Lamia Invitus. He's also the leader of Clan Quintano, the largest and most powerful vampire family in the San Francisco Bay area. When he's faced with the unexpected, in the form of newborn vampire twins Marc and Julie, he knows he needs help, so he reaches out to the one person he trusts more than anyone else, former lover Damian Ysidro Esposito-Montoya (the former Vizconde de Castille).

Conrad and Damian have been separated for a little over a hundred years when fate thrusts them back together. Working as a team to co-parent the twins, they eventually craft an uneasy truce between them.

When I first started writing In the Dark, the first book in the series, I had assumed that the two would remain exes for the rest of their days. After all that time apart, all the other lovers in their lives, all the bad-blood, so to speak, between them...sorry, bad vampire pun...they must be over each other by now, right?

Well, apparently not. As the first book came together, it quickly became obvious that they both still had very strong feelings for each other. And they both wanted nothing more than to reunite. In the end, I couldn't say no. I had to devote most of book two (Old Sins, Long Shadows) to telling their story. And that still wasn't enough for them! I'm working on book five at the moment, and by now I'm pretty much resigned to the fact that they've taken over the series.**

Luckily, readers seem to love these guys as much as I do.

**Not to worry, however. The twins will be stealing center stage away from their parents very soon. But, shhhh. Don't let the boys know that yet!

Here's part of the flashback scene from when they're first reunited. And if you'd like to catch a glimpse of their very first encounter with each other, way back in fifteenth century Sevilla, click on the Free Reads tab at the top of this page and check out Spanish Love Song. Enjoy!


When you live forever, you’re bound to make a few mistakes.

1969 San Francisco. World-weary Conrad Quintano should have known better than to fall in love with a human—much less Suzanne Fischer, the barely legal, adventure-seeking hippie beauty known as Desert Rose. And the very last thing he should have agreed to do was to raise her babies and protect them with his life. But even twelve-hundred-year-old master vampires can find it hard to reject a deathbed request—especially when issues of love, guilt and blood are involved.

Present day. Raised in virtual isolation, twins Marc and Julie Fischer have always known they are vampires. But they never knew their parentage—or their unique status in the vampire world—until their “uncle” Damian comes to fetch them home.

The family reunion, however, isn’t what they expect. They’re thrust into a world for which they’re totally unprepared. And the father they expected to see, Conrad, is missing.
How to find him…and whom to trust? Solving the mystery of betrayal and vampire family values will prove the Beatles had it right. All you need is love…and an occasional side of blood.


For another long moment the two men stared wordlessly at each other. Finally, seemingly satisfied with whatever he’d seen in Damian’s face, Conrad dropped his gaze. He slumped back in his chair and sighed. “It’s good to see you, caro.” And then, again without giving Damian any chance to recover from this latest shock, he launched into his tale. “There was this girl…” 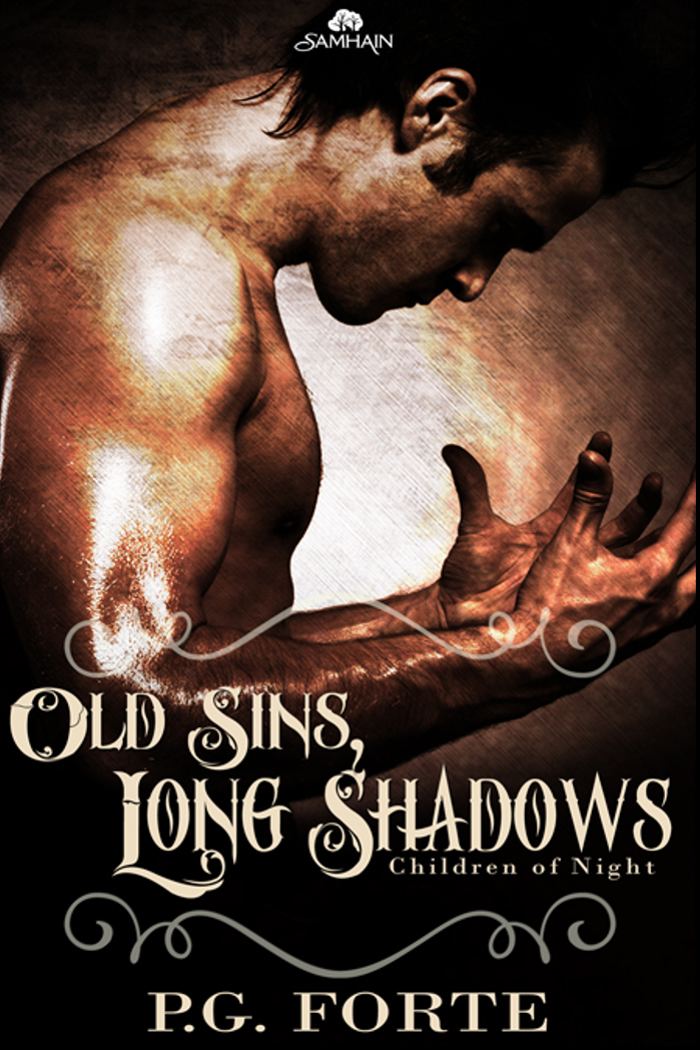 
1856, New York City. Moments after Conrad Quintano drives his life-mate away, heartache and guilt descend around his heart like a pall. Convinced that Damian’s hatred is as permanent as the scars Conrad has inflicted on him, Conrad steels himself for an eternity of emotional torture.


Present day, San Francisco. For the sake of vampire twins Marc and Julie Fischer, Conrad and Damian present a united parental front. In reality, their truce is a sham. Conrad, weakened by his recent ordeal, struggles against the urge to bring his mate back to his bed. And Damian misinterprets Conrad’s explosive temper as proof their relationship is irreparably broken.


When an old enemy’s quest to create a dangerous new breed of vampire threatens the twins’ lives—and the precarious state of vampire peace—it’s imperative the estranged lovers put the past behind them. Or the shadows of the past will tear apart everything they hold dear.