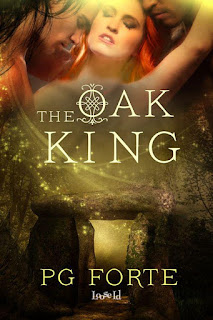 The house I lived in while I was growing up stood next to a vacant, wooded lot that belonged to my grandparents. As no one else in my family spent any time there or even seemed to give it any thought, I came to think of it as my own private forest. I spent countless hours there, especially during the summer months. It was where I went to hide treasure, to dig up arrowheads, to observe the local plant and animal life, to read, or just to daydream. It was always a most magical place. I guess that was partially in my mind when I wrote The Oak King, my re-telling of the legend of the Oak King and the Holly King.

For those of you who are not familiar with the story, the Oak King's magic has to do with growth and new life, and so he rules the light half of the year, just as his counterpart, the Holly King, rules the winter months. In the scene below, my heroine, Aine, comes face to face with Fionn, the current Oak King, for the very first time--although, of course, she has no idea of his true nature.

I'll be giving away a digital copy of The Oak King to one lucky reader. To be entered to win, just leave me a comment telling me what magical being or creature best embodies the spirit of summer to you.

The woods were shadowed, tranquil and green as Aine made her way into the forest. This early in the day the sun had yet to burn off the morning mist, but although the day promised to be fine, an unidentifiable melancholy seemed to hang in the soft, still air. It was just a trace, but enough of one that Aine took note of it and thought it strange. Why should the forest feel so gloomy today? What grief dared mar so perfect a morning?

When she reached her destination, a secluded grove where a stately oak and wizened holly stood a short distance from one another, she paused and glanced around, feeling the hair rise on the back of her neck. The sense of sorrow, of loss—of despair, almost—was even stronger here. She did not consider herself a fanciful woman, but there was an unusual sentience in the woods today. If she didn’t know better, she’d swear she was being watched.

She shook her head, waiting for the odd notion to dissolve. It was naught but foolishness. She was well aware that there was no one to see her. Indeed, that was another of the reasons why she’d chosen this particular place for her ceremonies; it was as far from her neighbors’ prying eyes as she could get. She brushed her concerns aside and set about getting ready for the morning’s ritual, taking comfort in the familiar routine—the same one she’d followed for several years now, ever since her husband’s death had freed her to worship as she saw fit.

She began by setting up her altar, reverently laying out the tools she would be using. Then she walked the circle, calling on the directions and raising power as she went, carefully placing eight stones around the perimeter to denote the quarter and cross-quarter days. When she’d returned to the start point, she stopped and removed her cloak. Cool air caressed her bare skin, raising goose bumps on her arms and legs and pebbling her nipples. A hush seemed to fall over the forest. The feeling of being watched grew stronger.

Her heart beating uncomfortably fast, she entered the circle and knelt upon the soft green moss. She’d come here today to sing songs of praise; to greet the newly crowned Holly King and pay homage to the fallen Oak—a ceremony that had always brought her joy in the past—but the atmosphere this morning had unsettled her. No longer in the mood to tarry, she rushed through her opening prayers and started right in on a hymn in honor of the Oak King. She was midway through the second stanza when her ordinary day caved in upon her. A naked stranger materialized from out of the fog, nearly scaring the life out of her in the process. Aine gasped in surprise. “Gods save me.”

The stranger said nothing. He stared back at her, looking almost as surprised as she. For one shocked instant Aine was convinced she’d somehow conjured the very Spirit of the Forest. Then reason reasserted itself. This was no insubstantial sprite—his heavy muscles and gleaming flesh attested to that. However godlike he appeared, he was likely no more than a no-account rover, a drifter who’d stumbled drunk onto her property the night before and judged this sheltered grove to be a perfect place to catch a night’s sleep.

“Who-who are you?” she demanded shakily, still staring at him. “Whence did you come?”

His chestnut hair was shaggy and overlong, streaked gold as though by the sun and in desperate need of a trim. It hung in his face, very nearly obscuring his beautiful hazel eyes. Even partially veiled, those eyes were remarkable, a warm amber color overall, like honey and cinnamon swirled together, but with bright flecks of summer green shimmering in their liquid depths. His strong brown body was broad and tall. Perhaps not quite a match for the oak tree that spread its branches above their heads, but still he was an impressive sight to behold. He quite captivated her attention. Although, given that they were both skyclad at the time, their mutual surprise was not so astonishing. She, at least, had a cloak with which to cover her nakedness.

“Answer me,” she demanded as she scrabbled for her cloak and hastily wrapped it around her. She was pleased that her voice no longer shook, though her heart was still pounding at far too swift a pace. In truth, she should be running away, but she feared her legs wouldn’t carry her.

“There’s no need to fear me, lass,” the stranger said, smiling in a way she suspected was meant to be reassuring. “I mean you no harm.”

Aine’s mouth tightened. “Sure, and wouldn’t you like me to think so?”

The stranger blinked and appeared confused. “I would, indeed. Why else would I have said it?”

Aine choked back a laugh. Her hands were shaking as she began to gather her tools together, spilling everything repeatedly, her motions too jerky and uncoordinated for anything else. “Why indeed.”

The stranger took a step closer. “Here, let me help you with that.”

“No!” Aine raised her hand in a futile effort to stop him. “Stay right where you are. Do not come any closer.”

His easy acquiescence emboldened her. She stopped what she was doing to level a glare at him. “What I wish is that you would answer my questions. Who are you and what are you doing here?”

FIONN DIDN’T ANSWER right away. If truth be told, he was having trouble finding his voice. It wasn’t just that her beauty stole his breath; he was also dazed and disoriented, momentarily depleted of power. Who knew it took so much effort to work magic? Well, Kieran, probably. Fionn suspected there were many things the Holly King knew but had not bothered to share with him.

Bitterness rose inside him at the thought. The hurt he’d once felt had long since turned to anger, but the old resentment smoldered still. If there was one thing Fionn would not be wasting time on—neither in the next six months nor ever again, if he were lucky—it was Kieran.

Now that he had broken free, Fionn intended to live as a human, at least until the winter solstice. Perhaps he wouldn’t go back at all. Maybe, if he were truly lucky, he would find that the winds could not find him on this side of the veil. Or maybe, in his absence, his Lord and Lady would find someone else to take his place, someone better suited to the task than he.

“Answer me,” Aine demanded again. Despite the hint of steel in her voice, her eyes were huge and her breath was shallow and far too fast. She is still frightened. The realization struck at Fionn’s heart and didn’t help him find his words any more quickly. She’d always seemed so supremely confident each time he’d seen her, like a goddess in the flesh. It had not occurred to him that his appearance would cause her to become anything more than momentarily startled. He hadn’t thought of…well, entirely too much, obviously, damn him for a fool. As usual, he’d acted on impulse, thinking only of his own needs.

But that thought merely strengthened his resolve. It was one more reason why he’d been right to take this step and leave the throne behind. If he could not live up to even his own expectations of how the Oak King should behave, why not try and carve out a life for himself here, where no one had any expectations of him at all?

“My name is Fionn. I heard you singing.”

“And what of it?” Aine’s chin rose. A hint of challenge hardened her gaze. “This is all private property. You would not have been in a position to hear anything if you were not where you’ve no right to be in the first place!”

“But why should I not hear your song?” Fionn asked in surprise. “You have such a beautiful voice. I had to come out and…and meet you.”

Her voice was beautiful, beautiful, honest, clear, and she’d been singing to him, though she did not yet know it, sweet words of love, honor, and respect, when all he’d had elsewise for year upon year was censure. Her song had been balm to his wounded soul, a lure he could not resist. “I had to come.”

Holly King Kieran Mac Cuilenn never desired a human lover--until now. Seeing Fionn and Aine together fills him with longing for the love he threw away and awakens feelings he thought he'd buried with the last Oak King. Is there enough magic in the solstice to correct the mistakes he made years ago? Or is he doomed to be forever left out in the cold?

Don't forget to visit all the other wonderful blog posts as the Summer of Magic Blog Hop continues! 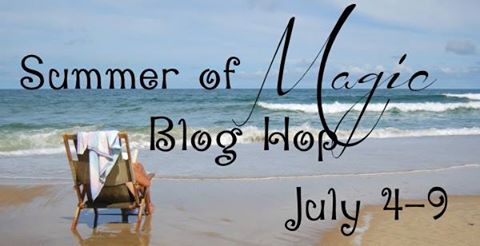