Shawna will be discussing her blazingly hot Venus Press release Deep Undercover while I'll be discussing Visions before Midnight (Book Seven in the Oberon series) which is set during the Halloween/Samhain season.

And, just to get you in the mood, here's an excerpt...

In this scene, Erin recalls the somewhat drunken one-night-stand she had with Chay several months earlier... 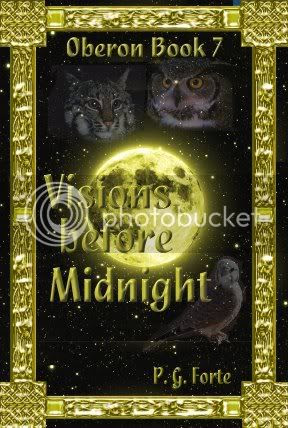 Erin watched from the wings as Chay made his presentation to the parents. He spoke quietly, almost hesitantly, but she could tell just by looking at him that it was not from a lack of preparation or any kind of nervousness. There was no tension whatsoever in his body. He looked graceful, relaxed, completely at ease; as though he’d been born to speak before crowds of people. And, somehow, his diffident manner only compelled his audience to pay closer attention to his words.

Maybe it was him, or maybe it was his subject matter. She could tell it was a topic he cared about. He sounded passionate, knowledgeable, intelligent, authoritative and yet modest. Most surprisingly, for once, his attempts at humor did not seem at all out of place. His jokes were like subtle spices sprinkled throughout his speech. The laughter they elicited warmed and softened the crowd, and made them even more eager to be charmed.

Listening to him, Erin began to think he could talk anyone into anything. Or, out of anything. And with that thought came an unexpected spark of anger.

Maybe she’d been beating herself up too much, over their encounter last Spring. Maybe she hadn’t been so much weak as unwary. Maybe it was his fault they’d ended up in bed, only hours after they’d met.

She’d been so tired that night, and so completely demoralized over Melissa’s defection. When she awoke the next morning, she was face to face with a stranger, and with no clear recollection of the events that had led to his being there.

She had begged him to stay––she remembered that part pretty clearly––and she remembered most of what happened afterwards. But before that? Well, that’s where things got fuzzy. As far as she could recall, she’d invited him home, plied him with the promise of coffee, and then...

She knew that at some point she’d thought about kissing him. Thought about straddling his lap, taking his face between her hands and...

But, maybe there’d been something missing from that equation.

He glanced over, just then; saw her, and smiled. Her stomach did a funny little flip. Oh, God, he’s hot.

His long hair was loose tonight, except for two, narrow braids, one on either side of his face. He wore jeans and boots and a casual shirt, open at the throat, sleeves rolled just below his elbows. A wide strip of beaded leather encircled one wrist and a small, familiar looking fringed bag, also leather, hung from his neck.

But, good as he looked right now, she couldn’t help remembering how much better he’d looked last May, stark naked in her bed...

She’d been flushed and trembling, and was once again on the verge of begging, by the time they’d shed most of their clothes. It seemed her shyness had vanished right along with them. It was that look in his eyes when he gazed at her that had done it. True, it had dismayed her, at first, but not anymore. For how could she feel anything but beautiful, when he looked at her with such hot approval?

She groaned with impatience as he stood and stripped out of his jeans. He was taking so long to get ready––an interminable time––and she was aching for him. She needed him now!

He glanced at her and their eyes locked. The air between them seemed charged with some indefinable energy. For a long moment he stood motionless, smiling down at her, while she stared back at him and the room spun in dizzy circles around them both.

How on earth had he come to be here? She felt like the winning contestant on some bizarre reality show; one that hooked up random strangers, matching demi-gods with ordinary women to see what would happen.

What had happened was that she’d become instantly infatuated. She was quite certain she’d never seen, nor even imagined, anyone more beautiful. He was perfect. Absolutely and totally–

"Did you say something?" he asked at last.

She shook her head. God, I hope not. It would be too awful if she’d spoken any of those last thoughts out loud. He moved closer, leaning over her, imprisoning her with his arms, and she lost her breath.

His eyes were twinkling. "Are you sure?"

No, not really. She met his eyes, saw the mischief there, and almost groaned again. Oh, lord, he was going to make her beg, again, wasn’t he?

"I think you did, you know," he murmured, lowering his voice as he lowered himself on top of her. "I’m pretty sure I heard you."

He smelled incredible, smoky and male. The room spun faster. "Do you want to know what it was you said?"

He moved his mouth to within inches of her ear and whispered, "I think what you said was: You’re beautiful. And, even though we’ve only just met, I have to have you." Then he pulled back a little and looked at her. "Was that it? Was that what you said?"

His eyes widened in surprise. "It was, huh?" He straightened his arms, raising himself away from her. He cocked his head to the side and gazed down at her. "You know, you just messed up what might have been my best line yet."

She frowned in confusion, missing the warmth of him so much, she nearly cried. "How did I do that?

Smiling, he dipped his head to kiss her nose. "Well, what you were supposed to say was something like, ‘that wasn’t me, it must have been you.’ And then I’d say, ‘you’re right, it was me.’"

Erin blinked in confusion. Had she missed something? "But, you didn’t say that, either. Did you?"

Well, that was interesting. "Why didn’t you say it, then?"

He shrugged. "It didn’t exactly seem like the best way to start a conversation with a beautiful lady. I figured you might throw that very strange, blue drink of yours in my face if I opened with a line like that."

"Hmm. Good point." She probably would’ve, at that. She ran her hands up his arms and across his shoulders, thrilling to the feel of him. She locked her hands at the back of his neck and smiled. "What if you tried it now?"

Once more, he bent his head and kissed her, first on the mouth, and then twice more, once on each breast, as he said, "You’re so very, very, very beautiful." When he raised his head again, he was smiling, too. "Can I please have you?"

His gold eyes glittered cat-like in the lamplight and she was suddenly too short of breath to speak.