Closing Out the Holidays

I'm playing catch-up today. I  have holiday sales that are close to ending, holiday freebies that are going back in the vault until next December, an antho that is going away FOREVER in a couple of weeks. But I also have a couple of brand new reads that are going to be available (free, of course) only to members of my reader group. Read on for details:

My Holiday Book Sale will run 'til the end of the week. After that, Finders Keepers, Iron and Oak all go back to their everyday prices. Links are on my website. Books are available...well, wherever you buy your ebooks.

My FREE For the Holidays Web Page is going back into hiding until next year as well. If you'd like to read "Counting On Christmas" sometime THIS year, RIGHT NOW might be your last chance.

The Nine Naughty Novelists are closing up shop within the next week or so, so this is definitely your last chance to get Nine Nights in New Orleans EVER. We're sad to see it go, but it was time.

If you're a member of my FB Readers Group The Crone's Nest, I have two holiday presents for you. Okay, one's, technically, still in the works, but it will be available ANY DAY NOW.

The first present is the NEWLY COMPLETED Prologue to the upcoming Winter Hearts series (which I'm calling Winter of Our Discontent).

As the world mourns the loss of brilliant inventor Dr. Charles Winter (known affectionately to his friends as the professor) most remain unaware of the great technical advances he had made in the areas of cloning, artificial intelligence and mechanical life-forms. Sadly, this ignorance of so much of his most far-reaching and astonishing work extends even to the professor's own family, which includes his four adult children, the product of his marriage to the late Millicent Pearson Winter.

The younger Winters are quirky and independent, dedicated to social justice, rational science and intellectual achievement. Inculcated from earliest childhood with their mother's Quaker beliefs and their father's dedication to progress, the four siblings are tireless in their pursuit of whatever personal goals they happen to set for themselves.

At the time of their father's death, the siblings had yet to discover the fact that their supposed half-sister, Ophelia, was not the result of their father's infidelity as they'd long supposed. This ignorance precipitated a crisis for Ophelia, as is documented in the series prequel, This Winter Heart. 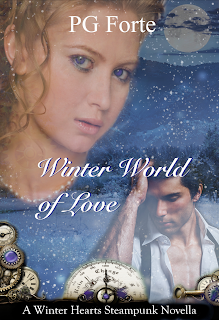 My second gift is Winter World of Love, which is a sequel to This Winter Heart. That's the one that's late. But it's definitely coming soon! And if you want it, join the club...in a manner of speaking. lol!

Just one short year ago, Ophelia Leonides returned to New Texacali hoping to reconcile with her husband. And, for a while, it seemed that most, if not all, her dreams were coming true. But as the holiday season approaches, Ophelia can’t help but notice that Dario has begun to brood. He says it has nothing to do with her, but trust, once lost, is hard to regain.

Dario is frustrated by his inability to give Ophelia the life he knows she deserves. Now, as old ghosts from his past draw close, and the bright future he’s promised his wife grows increasingly dim, he’s on the brink of making a last, desperate gamble--one that might destroy everything they've been hoping to achieve.

I'm having so much fun with this series. I hope you'll join me as the Winter Hearts journey continues! Look for the next book in the series, Lightning in a Bottle, later this year. 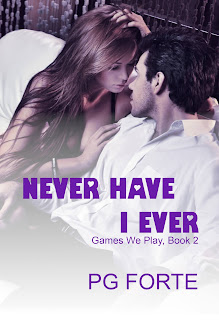 Okay I lied. The excerpt isn't really new. It's from Never Have I Ever (Games We Play, Book Two) which I'm hoping to re-release next month. It's currently available on Radish, however, along with the other books in the series, in case you'd like to get a head start on reading the books that way. But the excerpt I'm about to share has been kicking around the internet (and my brain) for a lot longer than the series it's become a part of. It started out (exactly ten years ago!) as a piece of NYE flash fiction, Luke started out as Tony, and the nameless customer at the end of the bar became a bearded ginger who'll figure prominently in the series...life is full of surprises like that.

Here's the link to the original, in case you'd like to compare--and also because it includes the "photo prompt" that inspired the whole thing. That's Kristy all the way in the back:

NEVER HAVE I EVER

Kristy loves Luke. But if anything was clear to her back when they were kids it was that gawky, awkward, tomboys didn't stand a chance with the king of the schoolyard. She watched her older brothers set their caps for Luke's glamorous cousins and get shot down. So she did what she had to in order to salvage her friendship with Luke. She hid her true feelings and her need for him to take control.

Luke wants Kristy in the worst way – actually, in all the worst ways: tied up, held down, beaten, bitten, whipped. But he knows he has no chance of ever having her. They'd been childhood friends and sweethearts, until she friend-zoned him in the fifth grade. He knows he can either keep her as a friend or take her to bed and lose her forever. His biggest mistake—so far—was in hiring her to work alongside him in the bar he and his cousins inherited from their grandmother. He knows Kristy needs the money and the job, but Luke's self-control can't take the constant contact with the girl he wants to dominate—both in and out of the bedroom. Something has to give—and soon!

Now available as a serial read on Radish Fiction at: https://radishfiction.com/stories/6761

That strip of bare skin across Kristy’s back—the one that appeared in the gap that stretched between the hem of her shirt and her pants’ waistband whenever she bent to get something from beneath the bar, as she was doing right now—had been driving Luke crazy all evening. Working this New Year’s Eve party together—why had he ever thought that was a good idea?