Don't you just love it when you get a new toy?

Okay, so maybe toy isn't quite the right word to use. The h/h of my current WIP just got back from a trip to Babeland, where they did get some toys, but me...I got something just as good. A pretty new banner, courtesy of Holly and crew at TRS

And now, because I love a good taste...er, I mean tease, here's an sneak peek at Love, from A to Z which is the second book in my LA series and the sequel to last month's release, Waiting for the Big One.

In this scene, in an effort to settle the question of who gets to tie who up first, April and Zach go bowling...

The noise inside the Lucky Strike Lanes bowling alley was deafening. Balls clattered and whirred along the alleys, pins crashed and tumbled as they were swept away. I ran my tongue nervously over lips that were suddenly dry, aware of every jittering, jarring vibration as it echoed deep inside me.

I arched an eyebrow at Zach. "This is your idea for how to settle the bondage issue? We’re going bowling?"

He smiled. "Why not? It’s simple, uncomplicated, it begins with a B. It’ll be fun."

Zach gazed at me sadly. "You have a very suspicious mind, don’t you? I’m not an expert bowler. You’ll just have to take my word for it. I’m guessing you’re not one either. But I figure, since just about everyone’s bowled at least a few times, we’re probably even. Neither of us has an obvious advantage. If you can think of something more fair than that, go for it."

"I suppose you have a point." But, just then, another ball hit the boards. Fluttering waves of sensation washed through me and I realized Zach’s point, if he had one, was moot. Either he was mistaken or he was lying, because, thanks to the little gift he’d presented me with after one of our earlier stops, one of us had a very big advantage right now––and it wasn’t me.

We’d gone clothes shopping first, at Beverly Center, where I’d picked out several outfits to tide me over for the next few days—just in case. Then we took Melrose east to La Brea, to a place called Babeland, where, while I checked out a cherry red mini-whip and matching cuffs, Zach purchased a variety of goodies, including a pair of Ben Wa balls…

"I’m supposed to put these where?" I asked, staring at the surprisingly heavy gold balls nestled on their red velvet bed.

"You put them inside you," he repeated, flashing that rogue dimple once again. "See, these gold balls are hollow. There are smaller, solid balls inside of them. If you shake them, you can feel them rolling around in there. They do that when you’re wearing them and it feels really good. Or so I’ve been told. I thought you might like to give them a try."

If I were even half as suspicious-minded as Zach claimed I was, I would probably have guessed, right then, that something was up. But I didn’t. Not even on the ride over here, though the throbbing of the motorcycle’s engine seemed hugely, and pleasantly, magnified, thanks to the movement of the spherical weights.

They felt nice, if distracting, and I hadn’t thought anything of the way he’d urged me to immediately try them out, until we arrived here. Now, I’d bet anything that Zach had counted on his gift making me too distracted to win this little contest. Talk about sore losers! If this didn’t count as cheating…well, it certainly should have.

There had to be a way for me to even the odds. But how?

I pondered the question while we waited for shoes and then for a lane; as Zach helped me choose a ball, and as he explained the basics of scoring. But it wasn’t until he was showing me proper form––instructing me on arm-swing and all the finer points of good delivery––that the solution appeared.

It felt nice to have him stand so close behind me, one hand grasping my wrist, the other snugged securely around my waist. I already would have had a hard time concentrating on anything else under those circumstances, but it was at that point that the player on the next lane over made his approach and when his ball made contact with the maple I gasped, rocking back on my heels.

"Are you okay?" Zach asked as he steadied me.

"Yeah, I’m fine. I just, um…" And that’s when it hit me. I could tell by the way my cheeks were flaming that a flush had spread up my chest to my face. When I noticed how Zach’s gaze kept sliding south, , I knew just what I had to do.

It might not have been entirely fair, and it was certainly not completely honest, but it’s nothing I’m ever going to apologize for, either. I really needed to win that contest!

"Wow," I murmured softly, allowing my lashes to fan my cheeks as I let out a slow, shaky breath. "I’m fine," I repeated, smiling just a little as I extricated myself from his arms.

"It’s like this, right?" I asked, mentally reciting the instructions in my mind; step, step, slide…

The ball left my hand and rolled slowly down the lane to connect with the head pin. Several pins clattered to the floor and I allowed myself a dramatic little shudder. Smiling, I turned to look at Zach. "Not bad, huh?"

"Not bad at all," he agreed. "But are you planning on doing that little shimmy thing every time?"

"Maybe. I just can’t help myself," Walking over to where he stood, I pressed my body close to his, loving the way his hands automatically clutched my hips. "These balls you got me are driving me crazy," I whispered in his ear.

His fingers bit into my flesh. "Are they?"

"I know." I brushed a chaste, little kiss on his cheek. "I’m so turned on right now I can’t stand it." To be honest, I’d been much more turned on by his guitar playing the other night. And, even right now, the touch of his hands, the smell of his skin, the heat that flared in his eyes when I smiled at him––they were all doing so much more for me than any toy ever could.

But he didn’t have to know that, did he?

"Come on, let’s play," I said, stepping away from him again and heading for the ball return; hiding my smile when I heard him mutter, "I don’t believe this."

Believe it, I thought, laughing quietly to myself. He might have been the one to start this game, but I was gonna take him down.

For those of you who read more than one of my blogs, I apologize for the duplicate posts, but I wanted to get the word out on my latest news, and this seemed like the most expedient method. A lot of excitement this week. I'll be chatting for THREE DAYS (August 7, 8 and 9) at http://groups.yahoo.com/group/RomanceJunkiesReaders/, where I'm proud and excited to be this month's Staff Pick.

Please stop by if you have the time. I'll be answering questions, posting excerpts...well, OF COURSE, I will!!! And giving out prizes including an autographed copy of A Sight to Dream Of which has just been released as a Trade Paperback! 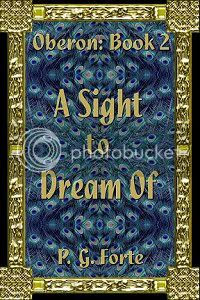 I'd also like to remind everyone who hasn't yet signed up for either my newsletter or my new author's group to please do so! I'm holding monthly contests for members of these two groups only. This month I'm celebrating the Trade Paperback release of A Sight to Dream Of by giving away a beautiful 'Celtic Circle' pewter and steel bookmark from Oberon Design.

This contest ends on August 31. Winner will be announced in September's Newsletter.