Is that a subgenre?  It is now!

These are two of the Books of my Heart, stories that, for one reason or another, demanded to be written. 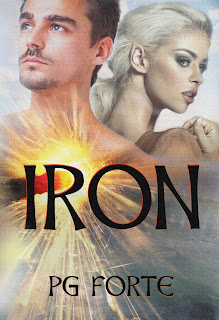 Iron, which holds the distinction of being the only one of my books that has ever finalled in a contest, is the result of a random question posed by a reader during an online chat. “What’s the most unlikely romantic pairing you can imagine?”

Now, I can imagine a lot, but in that moment it occurred to me that there wasn't much that was more unlikely than a fae (for whom iron is an anathema) and a blacksmith, someone who works with the stuff daily, whose life and livelihood depend on it.  The idea took hold and wouldn’t let go. Add to that the fact that my grandfather had worked as a blacksmith when he was a young man living in Ireland, quite some time ago—and the book had its setting.

“Nineteenth century Ireland. Blacksmith Gavin O'Malley is a bitter man, with a heart as hard as the iron he forges. He wants his life back--the one that was stolen from him the day his wife died in childbirth--taking their firstborn son with her.

When Aislinn Deirbhile, an immortal, shape-shifting fae, arrives on his doorstep, he knows he's in luck. For Aislinn can give Gavin everything he's been missing: A devoted-seeming wife in the image of his beloved Mairead, and children who are sure to outlive their father. Now, all he has to do is find a way to keep her--without losing his immortal soul in the process.

But Aislinn has an agenda of her own. On the run from a vengeful fae lord who's vowed to either make her his or end her existence, she knows the iron that allows Gavin to take her captive will also keep her pursuers at bay. In order to put herself permanently beyond her enemy's reach, however, Aislinn will need something more. She'll need to win Gavin's heart and convince him to willingly part with a piece of the very soul he's trying to save.”

At one point, there was an editor who wanted to turn Iron into a sword and sorcery story with a kick-ass, warrior heroine, but that’s not what this book is about. Not that Aislinn can't or doesn't kick ass, just not on the scale she wanted.

Iron is Gavin’s story.  The fae are immortal, and yes, Aislinn goes through some changes in the course of the tale, but it’s Gavin’s life that’s completely turned upside down. I have to admit that a few people have questioned the ending, to which I can only quote GK Chesterton: “The great Gaels of Ireland are the men that God made mad,  for all their wars are merry, and all their songs are sad.”

Iron is a very IRISH book, so it was going to have an element of sadness to it, that’s just the way of it—but I swear it’s still a HAPPY ending. I know Gavin and Aislinn would agree. 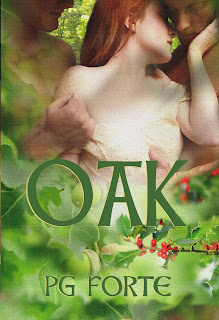 Oak, which was originally titled The Oak King,  is my re-framing of the Oak King and Holly King legend. I’ve made them tree spirits, and estranged lovers who fall for the same mortal woman.
I blame my mother for this one. Yes, the daughter of the grandparents who inspired Iron.

My mom’s the one who taught me to love trees. When my parents were getting ready to build the house in which they raised their family, it was my mother who insisted that as few trees as possible were to be cut down. As a result, I grew up in a house whose backyard that was a beautiful shady grove of mostly oak trees.

Seriously. How could I not write this story?

“This title was previously published as The Oak King.

Holly King Kieran Mac Cuilenn never desired a human lover--until now. Seeing Fionn and Aine together fills him with longing for the love he threw away and awakens feelings he thought he'd buried with the last Oak King. Is there enough magic in the solstice to correct the mistakes he made years ago? Or is he doomed to be forever left out in the cold?”

And, yes, in case you're wondering, there’s a bittersweet element to Oak's ending...and to its beginning, for that matter. But, how else are you going to get wounded heroes if there were never any tragedies in their pasts? And, really, it all works out in a very satisfactory, now and forever kind of way.

At its heart, Oak is absolutely Fionn’s story. Hence the reason for the original title. The name change was necessary to bring it into line with the other books in the series—because, yes, there are two more in the works.

Selkie, which I'm working on currently, is the story of a wounded seal-shifter who is rescued by a fisherman. Flight is a bird-shifter menage involving two men who grew up together and have always loved each other, and the mysterious woman who almost comes between them.

I am super excited to be working on these books. I'm also excited about the covers, which can be seen on my website: http://www.pgforte.com/CelticLegends.htm

These four books are all stand alone stories that don't depend at all on one another. They can be read in any order you like.