A to Z Coming Soon! 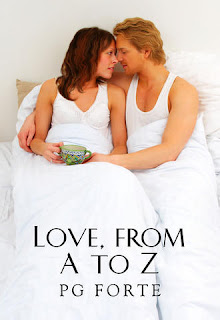 Well, I was recently given a release date for my new book, Love, From A to Z is due out on July 9th from Liquid Silver Books!

Total amnesia is not what Richie Valenzuela had planned on when he drugged his cousin. A few missing hours, which could easily be blamed on April’s having had too much to drink was all he was aiming for. And he certainly never expected the reclusive heiress to slip out the club’s back door with

the sexy guitarist she’d been making eyes at all night.

Zach Harris is sure the girl he’d picked up the night before had told him her name was Angel. Too bad she didn’t tell him anything more about herself, because, this morning, it’s not just him she can’t remember, she doesn’t even know her own name!

What April views as a problem, however, Zach sees as a once-in-a-lifetime opportunity; a chance for her to discover who she really is. Not her name or her address, but the important stuff. Her personality. Her likes and dislikes. Her preferences—in and out of bed.

I'm very excited about this one. We've been blogging all week at Wicked Whispers Erotica about our favorite male characters and I have to say that while I love all my heroes, the hero of this book--Zach--is right up there at the top of the list. I hope you all will love him as much as I do.

This scene takes place the morning after Zach and April meet. This is when she first realizes that something's wrong with her memory, and, at first, she tries very hard to deny it....

I lay with my head on his chest, listening to the thundering of his heart, while his hands stroked slowly over my back and we both struggled for breath. But, even then, even that soon afterwards, I could feel the anxiety rising within me.

Are you cold?" he asked as he reached for the sheet.

I shook my head. "No, I’m fine. Really." Kissing him lightly on the lips, I slid out of bed. I was shivering all right, but not from cold. Reaction was setting in now, and all I wanted was to get out of here, to get away, to go home.

Frowning, he propped himself up on his elbow. "Wait, what are you doing?"

"I have to go," I said, grabbing my clothes from the floor.

"I uh, yes. I have things to do." I couldn’t find my underwear, and didn’t feel like searching for it. So, he’d have a souvenir of our time together. I could live with that, I supposed.

"Just like that, huh?" Sounding vaguely disgruntled, he removed the used condom and tossed it into the waste basket. "Well…shit, at least give me your phone number, all right? So I can call you sometime?"

"Okay." My phone number. Sure. No problem with that, was there? I slid my feet into my shoes. "Or, you know what? Why don’t you just give me yours, instead?"

His frown deepened. "Look, Angel, did I miss something in the last couple of minutes? Is anything wrong?"

I shook my head. "No." Nothing was wrong, nothing at all. Why should I remember my own phone number, anyway? It was early in the day, I’d just gotten up, my head ached and, besides, it’s not like I made a habit of calling myself, right? "What could be wrong?"

"How would I know? But, it’s obvious something’s bothering you."

"Don’t be silly. Of course there’s nothing bothering me. I’m fine." I scanned the room impatiently. "Where’s my purse?"

Reaching into the nightstand drawer, he extracted paper and pen. "You didn’t bring one."

No purse? "Well, where’s the rest of my stuff then?"

"What stuff is that?" he asked absently, scribbling away.

"I dunno. In your jacket maybe?" He gestured toward an armchair, just inside the door.

"My jacket. Right." As I lunged for the gray, suede jacket draped over the back of the chair, he got out of bed and headed toward me; still naked and semi-erect. I tried not to stare.

"Here." He held out the slip of paper he’d been writing on.

I left off searching through my jacket pockets long enough to take it, smiling as I read what he’d written, not just his number, but his name, as well. Thank God! "Thanks, Zach. I’ll call you." Probably I would, too, if only to explain why I wouldn’t be seeing him again. I folded the paper and carefully stowed it in one of the pockets I’d already checked, then resumed my search.

"I thought we could at least have breakfast together," Zach complained, still sounding disgruntled. He stroked his hand down my arm. "C’mon, it’s Saturday. Do you really have to rush off like this?"

I nodded. "I’m kind of in a hurry." Fingers trembling I checked inside the last pocket, it was as empty as the rest. My knees were shaking so hard now, I couldn’t stand. "There’s nothing in here," I muttered as I sank down in the chair, trying to think, trying not to think. I had no money, no keys, no license, no ID. But, maybe there was nothing odd about that. Maybe I didn’t need a license, or a key. Maybe I didn’t have a car. Maybe I lived with people who would let me in. What terrified me was the fact that I couldn’t remember.

Zach crouched in front of me and took hold of my hands. "Hey, relax. Don’t panic, okay? Probably your cousin has your purse, right?"

He nodded. "Yeah, it figures, doesn’t it? You came into the bar with him, right? So probably you gave him your stuff to hold onto. Or maybe you left it in his car, or something, and just forgot."

I clung to his hands and his words and tried not to cry. "Okay. That makes sense, I guess."

"Sure it does." Rising, he crossed the room again and grabbed his phone. "Here. Why don’t you give him a call and find out? It’ll be cool. You’ll see."

"Oh." He returned the phone to its stand and then sighed. "Okay, well, still not a problem. I’ll just get dressed and give you a ride over there. How’s that sound?"

I wrapped my arms around myself and swallowed hard. It sounded great, except for one small detail. "I don’t know where he lives."

"You don’t?" His voice sounded skeptical, I didn’t blame him. Surely, I should know where my own cousin lived, shouldn’t I? He sighed. "Well, okay, scratch that plan, then. Where do you live? I’ll just take you home and we can–"

"I don’t know." My voice sounded so calm, so matter of fact, no one would ever guess that I was dying on the inside. But, something was wrong all right, and I’d just realized what. "I can’t remember that either."

Zach gazed at me sternly. "Okay, very funny. Now, cut it out. I’m trying to help, you know."

"I know," I whispered hugging myself even tighter, feeling hollow and helpless and altogether wretched. "But I can’t help it. And it’s not funny at all. I don’t remember anything." Including my name.

I know, I know. I should have had my new covers and links up weeks ago, but housekeeping has never been my forte.

*slight pause while you all groan in unison*

I could be brutally honest and admit it's never even been a mild interest, but that would be too much like airing my own dirty laundry...and, well, laundry! That goes back to the whole issue of housekeeping, now doesn't it?

I've updated my links, added a few more cool blogs to the column at right, updated my profile...slightly...and just generally cleaned things up.

Spring cleaning. In June. Right on schedule. Not!

All my covers can now be seen over there on the right, as well, including my newest cover for Love, From A to Z. if you like what you see, click on the link and you can read an excerpt. Want more? Then be sure to check out CoffeeTime Romance's Exotic Group this Thursday when I'll join the other fabulous authors of Wicked Whispers Erotica for a little chat.

Then be sure and join us from 11 a.m. EDT to 2 p.m. EDT, this Thursday, June 7 for chatter, news, excerpts, updates--whatever we can think of to throw at you. And, oh, yeah, what's a chat without prizes?

Also, be sure to check out the Wicked Whisper Authors blog:

Veronica Arch, Amelia June, Melissa Glisen and I post something new there every week day. This week's theme is Dreams--stop by and find out what we have to say about that! Also, every Wednesday is Hottie Hump Day. I know you can guess what we post then, huh? Can't wait to see the dreamy hunks Veronica will be posting for us all to enjoy this week. mmm.