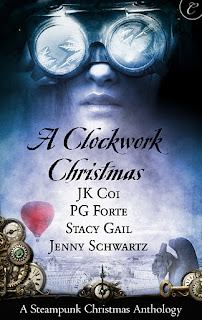 Three days to go 'til the release of A Clockwork Christmas--and, by the way, I still can't decide which I love more that title or the cover! I've been over the moon about both for months now.

Today I'm going to talk about JK Coi's story, Far From Broken. Once again, let's start with the blurb:

Colonel Jasper Carlisle was defined by his work until he met his wife. When the prima ballerina swept into his life with her affection, bright laughter and graceful movements, he knew that she was the reason for his existence, and that their love would be forever.

But their world is shattered when Callie is kidnapped and brutally tortured by the foes Jasper has been hunting. Mechanical parts have replaced her legs, her hand, her eye...and possibly her heart. Though she survived, her anger at Jasper consumes her, while Jasper's guilt drives him from the woman he loves. He longs for the chance to show her their love can withstand anything...including her new clockwork parts. 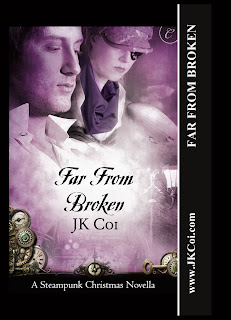 As the holiday season approaches, Jasper realizes he must fight not just for his wife's love and forgiveness...but also her life, as his enemy once again attempts to tear them apart.
27,000 words


Can I admit to being just the tinsiest bit jealous when I first read this story? Here's a gorgeous, heart-wrenching, romantic steampunk tale about an estranged married couple (she with some mechanical parts) struggling to reconcile with each other in the aftermath of a tragedy. One spouse has been keeping secrets, the other feels betrayed, there's guilt all around...


Um, yeah. That sounds about right, doesn't it? It sounds quite a lot like my own story, in fact. Except that Far From Broken is set in England--steampunk's native land. And, I have to admit it, though it's not often I'm out-angsted (what? it is too a word!) JK does it with ease.  Seriously though, if you're a fan (as I am) of dark, haunting love stories--this one's for you. 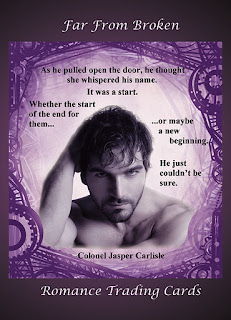 One of our Goodread reviewers had this to say about it:


"My favorite - just - of this series (yes, it was that good a series). It is the most atmospheric, the hero and heroine feel incredibly real, and it's hard to believe how much character and plot development the author has managed to pack into this little novella."

Read the rest of the review here

And remember, comment on this or any of the other countdown posts (or all of them, if you want more chances to win) and you'll be entered in a drawing to win a complete set of these lovely Romance Trading Cards.

We Wish You a Steampunk Christmas

Changed forever after tragedy, a woman must draw strength from her husband's love. A man learns that love isn't always what you expect. A thief steals the heart of a vengeful professor. And an American inventor finds love Down Under. Enjoy Victorian Christmas with a clockwork twist in these four steampunk novellas.

Crime Wave in a Corset by Stacy Gail
This Winter Heart by PG Forte
Wanted: One Scoundrel by Jenny Schwartz
Far From Broken by JK Coi

Thanks for giving us another peek, PG!